Weld Riley S.C. President John Robert Behling was recognized at the June Board of Regents meeting. John served the citizens of Wisconsin with distinguished leadership during his seven years on the University of Wisconsin System Board of Regents, including two years as board president (2017 to 2019) and two years as vice president (2015 to 2017). In all four elections, the vote was unanimous.

Behling said the size and scope of the UW System – 165,000 students and more than 40,000 employees – presents the board with great challenges but also great opportunities. He thanked Regents and System and campus leadership for investing in Wisconsin and investing in students through their work.

According to current Board of Regents President Ed Manydeeds, “The UW-System and the Board of Regents built a stronger, more effective partnership with the legislature and the Governor during John’s time leading the Board, and John worked diligently to advocate for our campuses, govern wisely, and remain accountable to taxpayers, citizens, and students.” 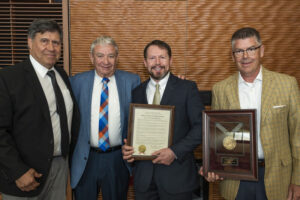 “John Robert Behling worked for me for over a decade and spent seven years on the Board of Regents. I could not be prouder of his accomplishments,” said former Wisconsin Governor and current UW System President Tommy G. Thompson.